The Earth and other planets are made of relatively simple materials at very high pressures and temperatures. Laser-heated DAC is capable of reaching the P,T conditions of the center of the Earth and the deep interiors of Joviant planets. Therefore, the goal of our studies is, combining the laser-heated DAC technique with synchrotron x-ray diffraction and coherent laser-spectroscopic methods, to understand the exact physical and chemical states of major constituents of Earth and Joviant planets at high pressures and temperatures.The materials under current investigation range from hydrogen to planetary ices like water and methane to Fe and Fe-bearing oxides. Iron, for example, is the dominant element of the Earth’s core and, therefore, the determination of its phase diagram at high pressures and temperatures is central to understanding a large number of properties and processes of the planet’s deep interior, including the temperature profile, chemical composition, energy balance, dynamics, and geomagnetism. For this reason, there have been numerous studies for understanding the phase diagram of iron. In fact, current constraints on the iron phase diagram under Earth-core conditions heavily rely on diamond-anvil cell (DAC) and shock wave results.

Chemistries and physical properties of Earth’s volatiles such as CO2, water, and hydrocarbons, and those with minerals are not well understood at high pressures and temperatures. Carbon dioxide, for example, is a major greenhouse gas and an important terrestrial volatile. It is also considered to exist in the deep interior of the Earth. Yet, it is not well understood whether (or how) such volatile species are incorporated into the Earth’s lower mantle and core, resulting in a major uncertainty in the deep carbon cycle. The presence of CO2 deep in the Earth can alter the properties of minerals and rocks including the melting temperature and mechanical strength and, thus, strongly affects the chemical and physical stability of deeply subducting plates. The mass and thermal diffusion rates of carbon dioxide into rocks and minerals are important considerations for carbon dioxide sequestration, but they are largely unknown at elevated pressures and temperatures, leaving questions about the long-term storage. The relative stabilities of carbonate minerals (such as calcite CaCO3, magnesite MgCO3, and siderite FeCO3) with respect to mixtures of high-density extended CO2 (or polymeric CO2) and minerals (such as CaO, MgO, and Fe) are not well understood. Yet, they are important in understanding both the deep mantle presence of volatile species like CO2 and the geochemical transportation mechanism. Hence, we study the phase stabilities of Earth’s volatiles such as CO2 (see Figure) and H2O, as well as the chemistry between them in the presence of Earth minerals at high pressure-temperature conditions of deep Earth’s mantle. 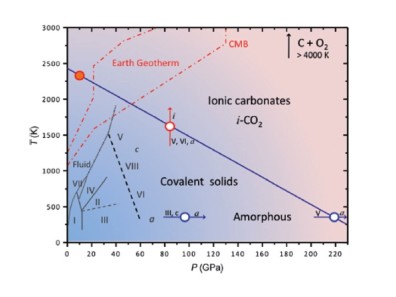 This project is currently supported by: