Application of high pressure significantly alters the interatomic distance and thus the nature of intermolecular interaction, chemical b

onding, molecular configuration, crystal structure, and stability of solid. With modern advances in high-pressure technologies, it is feasible to achieve a large (often up to aseveral-fold) compression of lattice, at which condition material can be easily forced into a new physical and chemical configuration. The high-pressure thus offers enhanced opportunities to discover novel materials, both stable and metastable ones, and to tune exotic properties in a wide-range of atomistic length scale, substantially greater than (often being several orders of) those achieved by other thermal (varying temperatures) and chemical (varying composition or making alloys) means. The thrust materials of interest in our research include:

This project has been supported by:

on conventional and improvised energetic materials

Reactive materials such as metal powders, thermite mixtures, mixed composites, and nano-energetics are an emerging class of energetic materials, whose thermochemical responses are very different from hydrocarbon-based energetic materials. In order to evaluate the performance and reliability of reactive materials, one needs to know the dynamic responses over a wide range of time scales; for example, ms for intermetallic reactions, ms-ms for metathesis reactions, ms for metal combustion, and ns for detonation. Hence, the goal of this project is to understanding dynamic responses of reactive materials, particularly, via resolving the structural and chemical evolution of reactive materials under rapidly propagating, exothermic reactions, using various time-resolved spectroscopic and diffraction technologies.  The development of new enabling technologies are also of interest to this project. 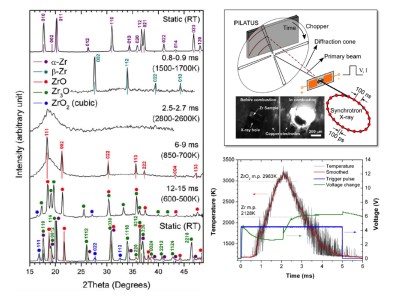 Recently, we have developed time-resolved synchrotron x-ray diffraction at the APS, utilizing a large 2D x-ray detector and a fast running x-ray chopper. This new technique has been applied to get real-time structural information during metal combustions and intermetallic reactions, as shown in the figure. It shows the time-resolved x-ray diffraction patterns obtained during Zr combustion with a 30 ms time resolution. This result reveals several significant facts: (i) the combustion occurs from molten phase of Zr – the first direct evidence observed. (ii) The combustion process is substantially more complex than what we have typically assumed previously (Zr + O2 -> ZrO2). It undergoes a series of transformations from a-Zr -> b-Zr -> liq-Zr -> ZrO -> Zr3O -> ZrO2, many of these transformations are exothermic, thus, important for understanding the energetics of Zr combustion. (iii) quantitative chemical – time information regarding the combustion. Note that these are critical data to develop/validate thermochemical models. In fact, many thermochemical libraries currently used have a limited data basis for reactive materials and incomplete descriptions of metal combustions.

WSU is a leading institute for high-pressure research both in static and dynamic research, with a wide range of enabling capabilities such as laser-heated DAC, dynamic-DAC, micro impactor, laser ablator, and various gas guns – all coupled with cutting-edge time-resolved spectroscopy, high-speed microphotography, time-resolved spectro-pyrometry, and the third-generation synchrotron x-ray source at the APS.

This research has been in support of: