The overarching goal of this study is to understand the relationships among crystal/liquid structure, electronic structure, and lattice vibrational (phonon) properties of f- and d-transition metals, alloys, and compounds, at high pressures, by using the nation’s brightest third-generation synchrotron x-ray at theAdvanced Photon Source (APS). Particularly of interest in our research is unusual phase transitions driven by electron correlation effects that occur in many f-band transition metals, magnetic 3d-transition metals, and their compounds and oxides. The exact nature of these transitions has not been well understood, including the short-range correlation effects themselves, their relation to long-range crystalline order, the possible existence of remnants of the transitions in the liquid, the role of magnetic moments and order, the critical behavior, and dynamics of the transitions, among other issues.  Many of these questions represent forefront physics challenges central to superconductivity, giant magnetorestiction, quantum criticality, and heavy Fermion behavior in strongly correlated condensed matters, in general. 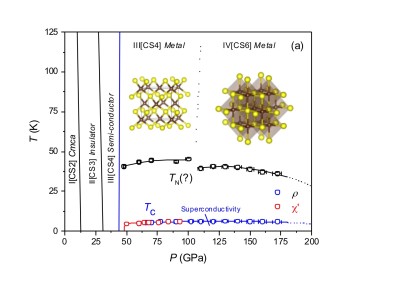 Superconductivity is a physical property displayed by only a subset of molecules, generally at very low temperatures, and is highly valuable in a number of industrial applications. This has lead many researchers to look for new materials that can behave as superconductors. One such material, carbon disulphide, has defied expections, and in a recent publication in Proceedings of the National Academy of Sciences is shown to be a superconductor in a disordered molecular array.

The phenomenon of superconductivity was first described in 1911 by Heike Kamerlingh Onnes, who observed a sudden drop in the electrical resistance of solid Mercury at 4.2 K (-452°F). The metal nonetheless maintained its ability to conduct electricity. 100 years and five Nobel Prizes later, including one for Onnes, many of the physical aspects of superconductivity have been ironed out.

One of the physical requirements for superconductivity, seemingly, was the formation of a regular molecular lattice structure through which pairs of electrons, called Cooper pairs, could flow. However, this new work by an international team of researchers from Washington State University, Carnegie Institution of Washington, and the Japan Synchrotron Radiation Research Institute, shows superconductivity can be achieved in disordered solid arrays.

“What makes this discovery special is that it seems counter to the understanding of how normally superconductivity works,” said Prof. Choong-Shik Yoo of Washington State University, a lead author on the study.

Carbon disulfide, which in its liquid state is a potent insecticide, shows a transition to superconductivity at 6.2 K at very high pressures (50 to 172 GPa). Having observed this, the authors then used a variety of techniques to probe the physical structure of the compound, and found that the transition to superconductivity is accompanied by a shift from a magnetically ordered state to one of physical disorganization.

“These results show the interplay between superconductivity, magnetism and structural disorder,” said Carnegie’s Viktor Struzhkin. “We are already at work searching for other highly conducting states in similar molecular systems in close collaboration with Professor Choong-Shik Yoo’s team.”

This work was supported by the National Science Foundation-Division of Materials Research, the Defense Threat Reduction Agency, the Deep Carbon Observatory – Extreme Physics and Chemistry, and the Department of Energy/Basic Energy Science.

This effort is currently supported by: